skip to main | skip to sidebar
THINGS AREN'T ALWAYS WHAT THEY SEEM!

Sexing up machines or machining up sex? 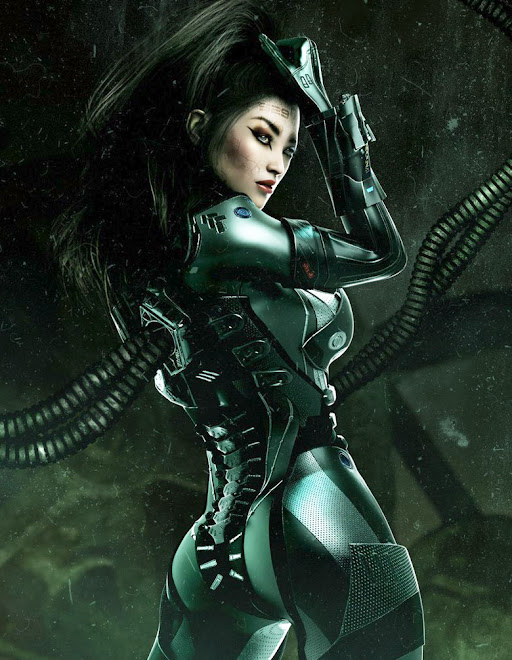 True Fire Bk 4
The Were of the Drakon 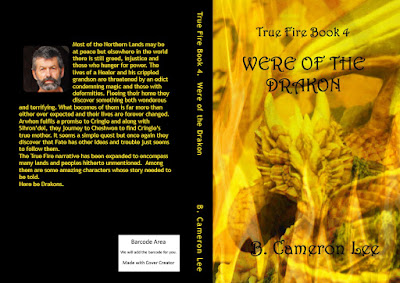 I just finished the previous post and realised it really was a long time since I was here. Life is just so full. Above is the cover of the fourth book in the Trilogy of True Fire. Yeah, I know but it just couldn't be helped - the thing was going around in my head so it had to come out. I love that world. Pre-industrial, working magic, drakons; it just doesn't get any better and there's so much more of it I have to be careful or I'll end up stuck in there.
Posted by B. Cameron Lee at 10:49 PM No comments: 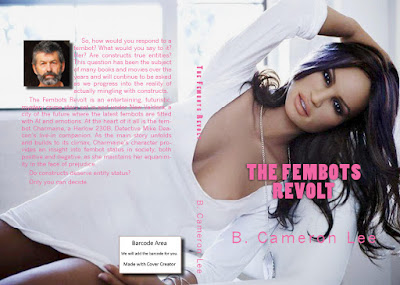 Cover picture is of a 'Real Doll'.  (See earlier blogs)

Hi, its a fair while since I've added anything to this blog page. Life is busy. With a lot less time for introspection and navel gazing. One of the tasks which has been consuming quite a lot of my time recently is a complete rewrite of The Femmebots Revolt which is now rebadged as The Fembots Revolt. The story is far better than it was; extra content and a lot of editing. I originally wrote it way back when. Now, nearly a million words of writing later, I realised it was not up to scratch and had mistakes. I'm happy with this offering.
Posted by B. Cameron Lee at 10:34 PM 1 comment:

I'm So Tired of the Whining PC Brigade!

This article turned up in my emails and I am so incensed by all the whining, self righteous, offended, nasty people out there, I thought I would post it in full. If you are a sensitive new millennial, you'd better skip it because I know new millennials don't like to hear the truth.

Features Australia
From: The Spectator Australia 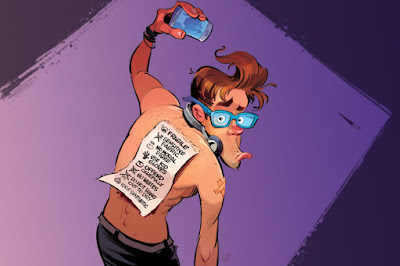 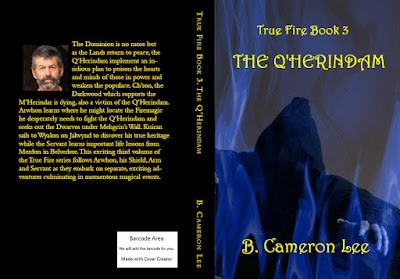 Well here it is, at last! I'm tempted to say the final book but it isn't. Although it rounds out the story on one land mass, there's the rest of the world to consider and like this planet, trouble occurs in more than one place. I already have vast swathes of a story floating around. It will bring back some or most of the protagonists from this trilogy. True Fire Book 3. The Q'Herindam available soon.

The Dominion is no more but as the Lands return to peace, the Q’Herindam implement an insidious plan to poison the hearts and minds of those in power and weaken the populace. Ch’ron, the Darkwood which supports the M’Herindar is dying, also a victim of the Q’Herindam. Arwhon learns where he might locate the Firemagic he desperately needs to fight the Q’Herindam and seeks out the Dwarves under Mehgrin’s Wall. Kuiran sails to Wyalon on Jalwynd to discover his true heritage while the Servant learns important life lessons from Merdon in Belvedere. This exciting third volume of the True Fire series follows Arwhon, his Shield, Arm and Servant as they embark on separate, exciting adventures culminating in momentous magical events.

Don't forget the website.  Wordsmorph.com
Posted by B. Cameron Lee at 1:21 PM No comments: 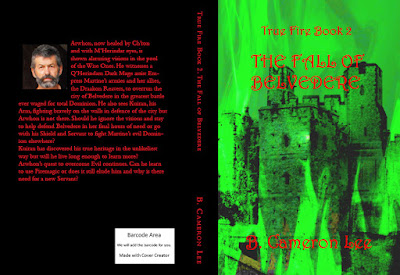 Here is the cover of the second book in the True Fire Trilogy which is out now.
You can find it at Amazon, CreateSpace, Bookstores and of course at Kindle. The book is already receiving  positive reviews which I find to be rewarding after putting so much time into writing it.
Book 3 - The Q'Herindam, is already written, it just needs a little more fine tuning and hopefully will be ready for release before the end of September.

'Arwhon, now healed by Ch’ron and with M’Herindar eyes, is shown alarming visions in the pool of the Wise Ones. He witnesses a Q’Herindam Dark Mage assist Empress Martine’s armies and her allies, the Draakon Reavers, overrun the city of Belvedere in the greatest battle ever waged for total Dominion. He also sees Kuiran, his Arm, fighting bravely on the walls in defence of the city but Arwhon is not there. Should he ignore the visions and stay to help defend Belvedere in her final hours of need or go with his Shield and Servant to fight Martine’s evil Dominion elsewhere?
Kuiran has discovered his true heritage in the unlikeliest way but will he live long enough to learn more?
Arwhon’s quest to overcome Evil continues. Can he learn to use Firemagic or does it still elude him and why is there need for a new Servant?'

For a peek inside - True Fire Book 2 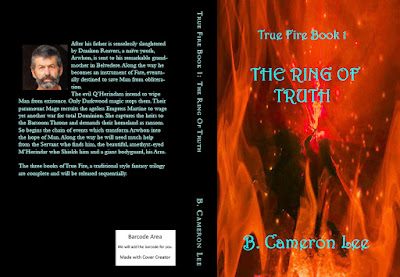 True Fire Book 1 is probably one of the best books I have written so far. I am quite excited about the whole True Fire Trilogy which is already completed. It's style is that of epic fantasy. The detailed story puts the reader into the Northern Lands of the preindustrial True Fire world.  Below is the 'blurb' from the back cover.

'After his father is senselessly slaughtered by Draakon Reavers,
a naïve youth, Arwhon, is sent to his remarkable grandmother in Belvedere. Along the way he becomes an instrument of Fate, eventually destined to save Man from obliteration.
The evil Q’Herindam intend to wipe Man from existence. Only Darkwood magic stops them. Their paramount Mage recruits the ageless Empress Martine to wage yet another war for total Dominion. She captures the heirs to the Barsoom Throne and demands their homeland as ransom.
So begins the chain of events which transform the youth, Arwhon, into the hope of Man. Along the way he will need much help from the Servant who finds him, the beautiful, amethyst-eyed M’Herindar who Shields him and a giant bodyguard, his Arm.'

The three books of True Fire, a fantasy trilogy, are written in the traditional epic style where the reader is immersed in a world populated with a multitude of realistic characters. They take on a life of their own and draw us, unwittingly, into sharing their existence while they pursue a solution to the evil growing in the land.
For a peek inside just click on the link. True Fire Book 1

I just scared myself by realising how long it has been since I posted anything on this blog site. The Femmebots have been written about and I have been hard at work rewriting my first two books and publishing them.
The tale is one that had figured in my dreams a number of times and when I got around to writing it, the story was almost all there. The Final Song was my first book. Rewind is the sequel. Both books deal with how the Devil and his demon children are trying to garner more souls by using technology but primarily it is a story about greed and human nature.
The covers are below. 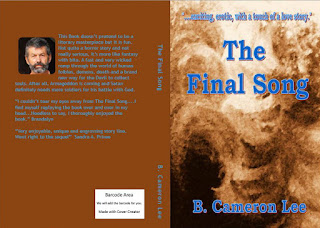 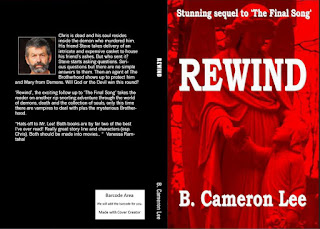 Both are available in paperback from Amazon and CreateSpace and also as a Kindle edition.
More at www.wordsmorph.com
Posted by B. Cameron Lee at 1:31 AM No comments: